Hello, this is old. You probably want the new list.

So, there have been some discussions and angry tweets recently about irritating Scala “features” (like value discarding and auto-tupling) that can actually be turned off by selecting the right compiler flag in conjunction with -Xfatal-warnings. I highly recommend a set of options something like those below.

If you’re like me and you find that the standard library gets in the way (especially Predef implicits) you might consider one of these (you don’t need both):

… which inspired this contribution from @timperrett 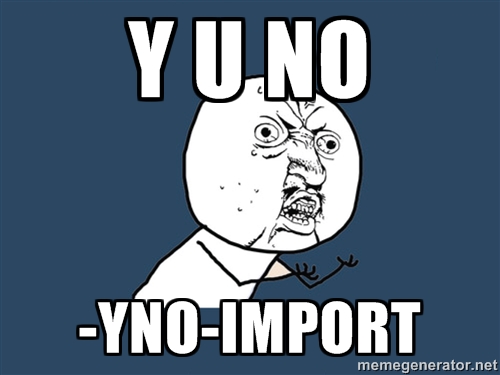 I also recommend keeping an eye on warteremover which casts a wider net and disables many other unsafe features such as null and return. If you try it out and find it’s hitting false positives (generally with synthetic code) please file a bug report. We’re working on it!

Sukant Hajra has more energy than I do and finally got to the bottom of the -Xlint and -Ywarn-all flags and found that although they are not the same from version to version, they are identical, which is probably a copy/paste bug. Here’s the relevant code from 2.9.3 and 2.10.3 if you want to see for yourself.

Brian McKenna points out that “only good things happen with -Xfuture” so it’s now on the list above. Thanks for the tip.

Gary Pamparà notes that -Ywarn-unused-import is available in 2.11, so it’s now on the list as well.